Trinidad and Tobago’s Madame Justice Althea Alexis-Windsor is Sworn in as a Judge of the International Criminal Court as Mr. Justice Geoffrey Henderson’s term at the Court Ends

The Government of Trinidad and Tobago is pleased to inform that Madame Justice Althea Alexis-Windsor, Judge of the Supreme Court of Trinidad and Tobago, took the oath of office as a Judge of the International Criminal Court (ICC) on Wednesday 10 March 2021. The Solemn Undertaking Ceremony was held at the seat of the ICC in The Hague, Kingdom of the Netherlands. Madame Justice Alexis-Windsor attended the Ceremony virtually.

Madame Justice Alexis-Windsor, who was endorsed by the Member States of the Caribbean Community (CARICOM), was elected on 23 December 2020 to serve as a Judge of the ICC for the period 2021 to 2030. She possesses over 23 years of experience in the field of criminal law including international criminal law, and served as a Trial Attorney and Appeals Counsel at the International Criminal Tribunal on Rwanda (ICTR). It will be recalled that the ICC’s Advisory Committee on the Nomination of Judges, in its assessment of Madame Justice Alexis-Windsor stated, “the candidate has exceptional judicial experience at the national level as a Supreme Court Judge of Trinidad and Tobago” and “based on both her professional experience and her answers during the interview, the Committee concluded that the candidate is highly qualified for appointment as Judge of the International Criminal Court.”

Addressing the Solemn Undertaking Ceremony were Mr. Peter Lewis, Registrar; His Excellency Judge Chile Eboe-Osuji, outgoing President of the ICC, and Her Excellency Silvia Fernández de Gurmendi, incoming President of the Assembly of States Parties to the Rome Statute of the ICC. Also in attendance were selected diplomats including His Excellency Colin Connelly, Ambassador of the Republic of Trinidad and Tobago to the Kingdom of the Netherlands based in the Kingdom of Belgium. ICC Judges were also present including Justice Geoffrey Henderson whose term as a Judge of the ICC ended on 10 March 2021.

The Government of Trinidad and Tobago expresses its profound gratitude for the contribution rendered to the cause of international rule of law by Justice Geoffrey Henderson who was elected in November 2013 to fill a vacancy resulting from the 18 March 2013 resignation of Justice Anthony Thomas Aquinas Carmona following his elevation as President of the Republic of Trinidad and Tobago. During his tenure at the ICC, Justice Henderson was assigned to the Trials Division where he worked on high profile cases including those involving Uhuru Muigai Kenyatta, Jean-Pierre Bemba Gombo; Laurent Gbagbo and Charles Blé Goudé; Abdallah Banda Abakaer Nourain; and Bosco Ntaganda. Justice Henderson also worked on the pre-trial situations in the People’s Republic of Bangladesh/Republic of the Union of Myanmar; Georgia; and the Plurinational State of Bolivia.

Trinidad and Tobago continues to be recognized internationally for its pioneering work in the establishment of the ICC which predates the entry into force of the Rome Statute. In 1989, the then Prime Minister of Trinidad and Tobago, the late Arthur N.R. Robinson, resurrected the idea of the establishment of a court with jurisdiction over international crimes in an address to the United Nations General Assembly. 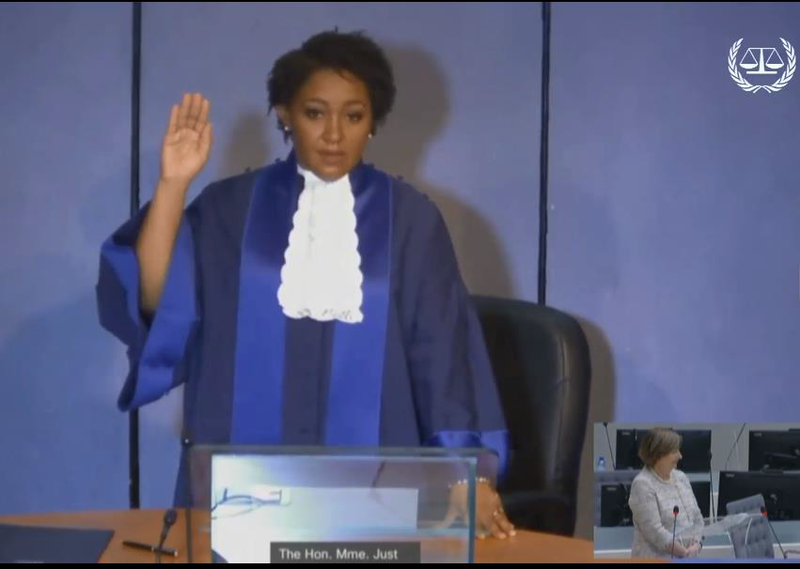